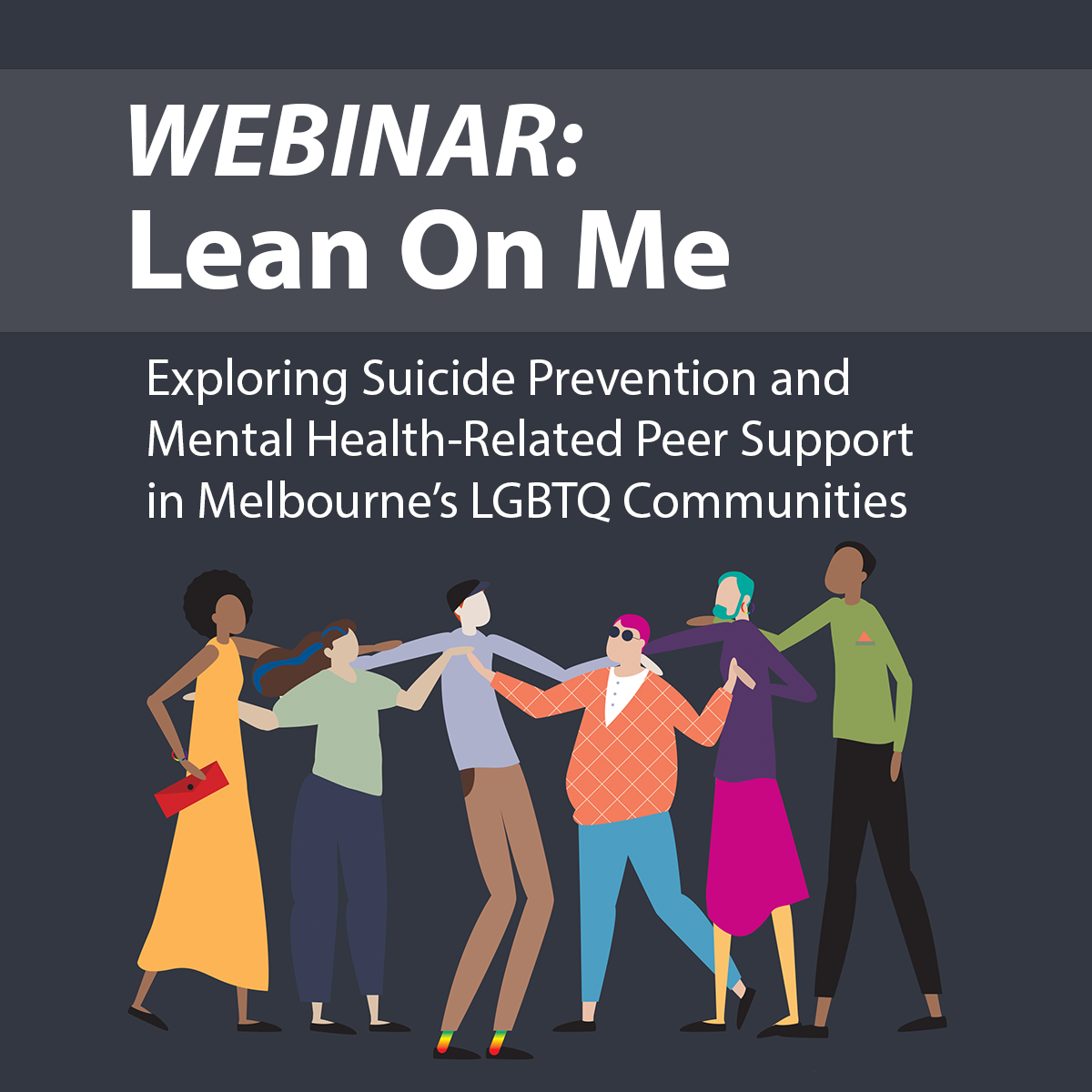 Lean On Me webinar

This live webinar panel, chaired by Amber Loomis of LGBTIQ+ Health Australia, explores the recently released Lean on Me report from La Trobe University. The report revealed that the responsibility for providing suicide prevention in LGBTQ communities in Melbourne frequently falls on peers with little or no training in responding to a mental health crisis. This ARCSHS report, funded by North Western Melbourne Primary Health Network (NWMPHN), explores how LGBTQ individuals experiencing mental health concerns turn to their peers.

Our panel will explore the ways that suicide prevention and mental health-related peer support is extensive and vital in LGBTQ communities in Melbourne. Such informal support can involve a person being there for a friend, partner, colleague or even a stranger during a mental health crisis, including when they are suicidal. The study drew from data collected in qualitative interviews with 25 people living in metropolitan Melbourne, Australia, and identifying as LGBTQ.

You can read the full report by clicking the button below:

About the Webinar Panel

Dr Adam Bourne is Associate Professor of Public Health and Deputy Director of the Australian Research Centre in Sex, Health and Society at La Trobe University where he leads a large program of research relating to LGBTIQ health and wellbeing. He has a particular focus on research into mental health and suicidality, alcohol and other drug use and family violence. Adam is a member of the Victorian Whole of Government LGBTIQ Taskforce and Co-Chairs its LGBTIQ Health and Human Services Committee.

Dr Andrea Waling is an Australian Research Council DECRA Fellow (2020-2023) at the Australian Research Centre in Sex, Health and Society (ARCSHS), La Trobe University in Melbourne, Australia. She is currently working across a range of research projects involving explorations of men, sexuality, and bodies; young people and sexual literacy, technologies, sex, and sexual intimacy, and LGBTIQ+ health and well-being.

She is a powerful voice, advocate, lived experience representative and recognised as an influential emerging leader in the mental health and suicide prevention sectors. In 2020 Anna was honoured to named one of Out for Australia's 30 under 30. Anna delights in sipping green tea, origami folding and co-parenting a boisterous young greyhound.

Jo Read is the Project Officer, Suicide Prevention Initiative at NWMPHN. Jo has led the LGBTIQ+ Suicide Prevention Trial for the past two years co-designing suicide prevention activities with LGBTIQ+ communities, people with lived experience, community controlled organisation and health organisations. Which included the Lean on Me Research project.