WHAT DO WE MEAN WHEN WE TALK ABOUT ‘LGBTI’ COMMUNITIES?

One way of thinking about ‘community’ is as a group of people who share some things in common, and within which there is also diversity. Communities also intersect and overlap. We have learned from your stories that there is no single or unified ‘LGBTI community’. Each group of people within ‘LGBTI’ has distinct health needs.

When it comes to ‘LGBTI communities’, it is also helpful to remember that people within these communities:

In the future, we will be exploring with you more deeply what it means to speak about ‘communities’ in a way that acknowledges the complexities of people’s lived experiences.

When speaking about our communities, we are careful to be specific about how each grouping may or may not related to the following key concepts:

Each of these aspects might apply to a person in different ways at different points across the lifespan. 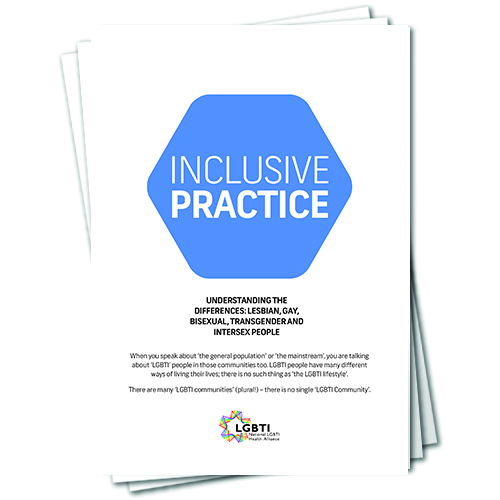 WHO ARE ‘LGBTI’ PEOPLE?

Each letter in ‘LGBTI’ contains a diverse range of real people, living real lives. ‘LGBTI’ people can be found in all walks of life, professions, faith communities, political parties, and locations throughout Australia.

When you speak about ‘the general population’ or ‘the mainstream’, you are talking about ‘LGBTI’ people in those communities, too. LGBTI people have many different ways of living their lives; there is no such thing as ‘the LGBTI lifestyle’. There are many ‘LGBTI communities’ (plural!) – there is no single ‘LGBTI Community’.

Historically, the Alliance has used ‘LGBTI’ in the broadest possible way and with the intention of supporting as many populations and communities as possible. We have deliberately acknowledged the limitations of ‘LGBTI’ language when attempting to speak about the full breadth of people’s bodies, genders, relationships, sexualities, and lived experiences.

WHAT DOES ‘LESBIAN’ MEAN?

A lesbian is a person who self-describes as a woman and who has experiences of romantic, sexual, and/or affectional attraction solely or primarily to other people who self-describe as women. Some women use other language to describe their relationships and attractions.

WHAT DOES ‘GAY’ MEAN?

A gay man is a person who self-describes as a man and who has experiences of romantic, sexual and/or affectional attraction solely or primarily to other people who self-describe as men. Some men use other language to describe their relationships and attractions.

WHAT DOES ‘BISEXUAL’ MEAN?

A bisexual person is a person of any gender who has romantic and/or sexual relationships with and/or is attracted to people from more than one gender. Some people who fit this description prefer the terms ‘queer’ or ‘pansexual’, in recognition of more than two genders. Although ‘bi-‘ technically refers to two, it is often used by people who have relationships with and/or attractions for people of more genders than just women or men.

WHAT DOES ‘TRANS’ MEAN?

Trans and Transgender are umbrella terms often used to describe people who were assigned a sex at birth that they do not feel reflects how they understand their gender identity, expression, or behaviour. Most people of trans experience live and identify simply as women or men; most do not have ‘a trans identity’. In addition to women and men of trans experience, some people do identify their gender as trans or as a gender other than woman or man. People from Aboriginal/Indigenous and Torres Strait Islander communities often use sistergirl or brotherboy. People from societies around the world with more than two traditional genders often use culturally specific language.

WHAT DOES ‘INTERSEX’ MEAN?