Writing Themselves In 4 National Report

The ongoing and significant impact of stigma, discrimination, violence and abuse on LGBTQA+ people’s lives has been confirmed by Writing Themselves In 4, despite recent legal and social progress towards acceptance.

Writing Themselves In 4 is the largest ever national survey of the health and wellbeing of lesbian, gay, bisexual, trans, queer and asexual identifying (LGBTQA+) young people aged 14-21. It was conducted by the Australian Research Centre in Sex, Health and Society (ARCSHS) at La Trobe University, supported by Rainbow Health Victoria. 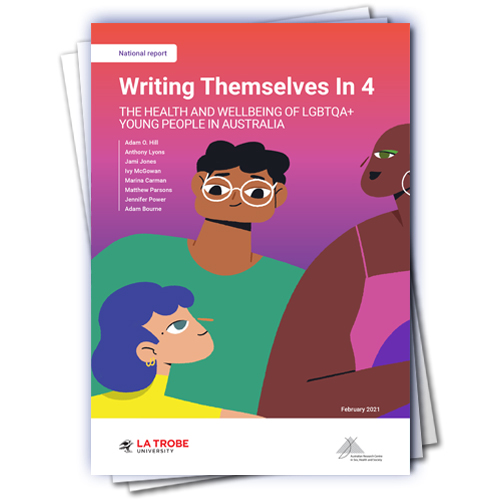 Acting CEO of LGBTIQ+ Health Australia, Zed Tintor, said, “there needs to be an urgent national response, including well-resourced LGBTIQ+ community-controlled health organisations, to ensure that LGBTQA+ young people can access culturally safe services wherever and whenever they need help.”

While progress has been made in some jurisdictions, a large proportion of LGBTQA+ young people also reported not feeling safe at school, TAFE or university.

“While there’s findings within the report we can find comfort in – for example more LGBTQA+ young people feeling supported by friends and family – there’s a great deal that’s concerning. We clearly need to be doing more to tackle the homophobia and transphobia that still exists within society so that all young people can feel safe,” Adam Bourne, said.

“LGBTQA+ young people are not broken and there is nothing inherently wrong with them. Reducing and eradicating minority stress within LGBTIQ+ communities starts with our young people - making sure they are given the respect, support and encouragement to be who they are and live happy and fulfilling lives,” Ms. Tintor, said.

“LHA, along with its members, will continue to advocate strongly for comprehensive investment that is urgently required to ensure that our communities’ mental health and wellbeing needs are met”, Ms. Tintor, concluded.

If you are experiencing distress and would like to talk with someone on the phone or over the web, then please call QLife on 1800 184 527 or go to www.qlife.org.au